Upload and Edit via Webdav

Web-based Distributed Authoring and Versioning, or WebDAV, is an extension of the HTTPS protocol that allows you to create a connection between your local computer and a server to easily transfer files between machines. After establishing a WebDAV connection, it is almost as easy to use files on the dotCMS server as those stored in local directories.

At the end of either of the two separate WebDAV folder connection paths a numeric language id parameter is required. This helps identify the language version of the file that should be saved/published. The numeric parameter provided should correspond to the value of the language id visible when editing the language under the dotCMS System→Languages tab: 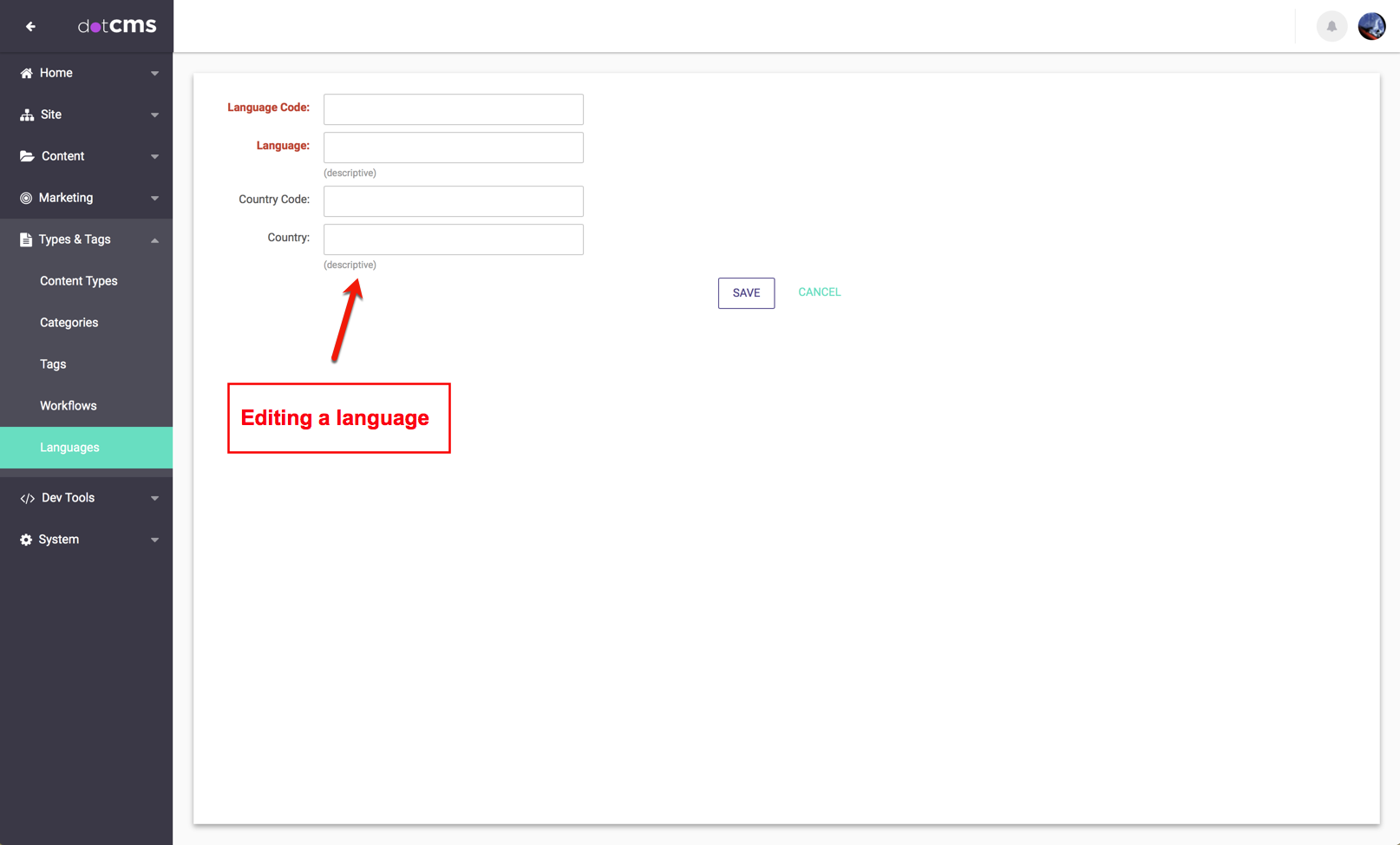 The URL to publish content in the default language is /webdav/live/1.

Files uploaded to this folder are automatically published in the default language configured for your dotCMS server as soon as the upload is complete.
Updating existing files: When you upload a file under this folder, and a file of the same name already exists, a new version of the file is created in the indicated language version, and that version is immediately published.

The URL to save content in a language other than the default language is /webdav/working/{language_id}, where {language_id} must be replaced by the language id of the desired language.

Updating existing files: If you copy a file to the working folder, and a file of the same name already exists, a new working (unpublished) version of the file is created in the indicated language version.

It is important to understand the following two special notes, especially for customers upgrading from dotCMS 3.5 or earlier to dotCMS 3.6 and above.

Prior to dotCMS version 3.6, the dotCMS webdav connection did not support multi-lingual file uploading.

Prior webdav connection formatting had only two upload folders: /webdav/autopub (to automatically publish uploaded files), and /webdav/nonpub (to save unpublished versions of uploaded files). Both of these folders published uploaded content in the default language only. To restore the previous behavior for compatibility with older versions and processes, add the following property to the dotmarketing-config.properties file (through a configuration plugin) and set it to true:

By default, dotCMS does not allow empty file uploading via WebDAV connection, the Site Browser, or Push Publishing bundles. Attempting to upload and empty file will fail and an exception will appear in the dotCMS log.

How you access WebDAV connection to your sites/folders varies depending on the operating system of the client used to connect to your dotCMS server. The following instructions explain how to set up a WebDAV client connection on different operating systems:

Setting up WebDAV on Windows

You may access dotCMS WebDAV folders on Windows in one of 3 ways:

There are two issues that require special care when using WebDAV with Windows. These issues are not with dotCMS but with Windows OS Software.

To set up webDAV for versions of Windows older than Windows 8, you must first install the Microsoft Software Update for Web Folders (KB907306). In addition to fixing issues when using web folders, this patch also includes several security enhancements.

The Windows operating system may place a limitation on the time for each WebDAV request, automatically timing out any request that takes longer than 20 seconds. Windows considers the copying of a folder with a large number of files as a single request, so WebDAV actions on folders may time out.

So to avoid time out errors when moving large numbers of files, it is best to move, copy, or paste the individual files instead of attempting to work with entire folders. Multiple files may be selected and copied, pasted etc. at the same time (you do not need to drag and drop each file individually). But when you work with groups of selected files instead of folders, Windows considers each individual file a separate copy request, each with its own 20 second time limit. This reduces the likelihood of time out errors when using WebDAV with Windows.

You may map the dotCMS WebDAV folder to a Windows Network Drive to simplify repeated access.

A Windows Security dialog box will open, prompting you to login. In it do the following:

You may also access the dotCMS Webdav folders directly by typing into the Explorer address bar. The address to type in will be in the following form:

Whether you access WebDAV via a mapped drive or by directly typing the address into the Explorer address bar, you should be able to open folders on your dotCMS host and drag and drop files to and from those folders in the same way that you transfer files between local Windows folders.

Setting up WebDAV on MacOS

You can set up WebDAV on MacOS using either Cyberduck or MacOS Finder.

To set up WebDAV using Cyberduck on MacOS:

You can download Cyberduck from either of the following websites:

3. Establish the Connection to dotCMS

Click the + icon in the bottom left corner of the application window.

Note: Depending on your version of Cyberduck, the Open Connection icon in the upper left corner of the application window may not give you the options you need to be able to configure the connection properly. 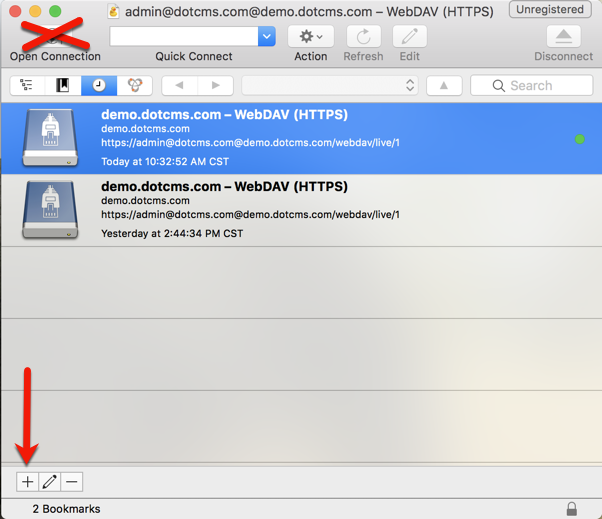 In the Connection window, use the steps as pictured in the following screenshot: 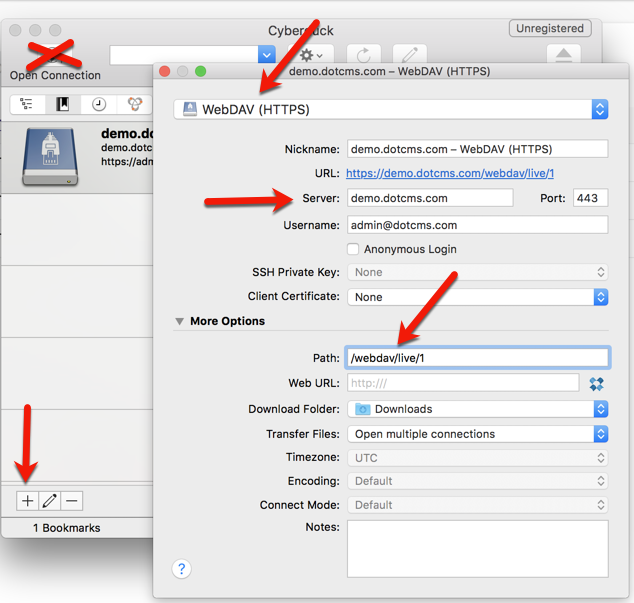 Once the connection is established, you should be able to open folders on your dotCMS host and drag and drop files to and from those folders in the same way that you transfer files between local MacOS folders. 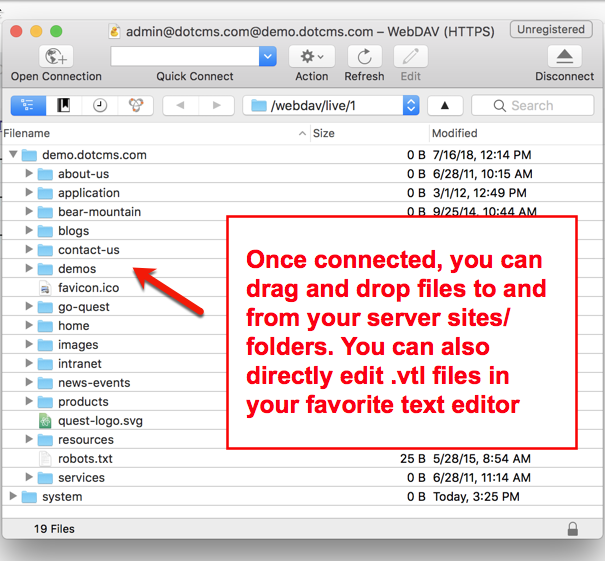 Note: We do NOT recommend using Finder for bulk uploading files via WebDAV. CuberDuck is recommended instead, since it is more robust with large data transfers.

Perform the following steps to use MacOS Finder to access dotCMS WebDAV folders: 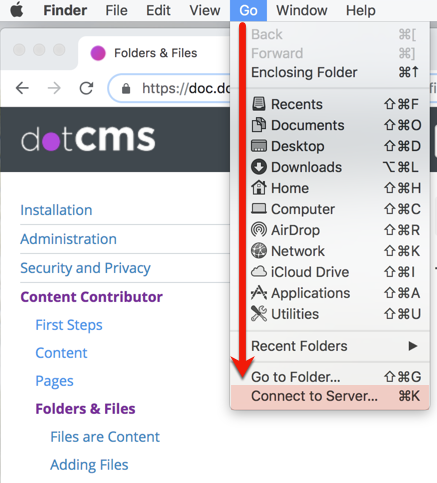 Open the new connection with the name of your website domain (login again if necessary).

You should now be able to drag and drop to the appropriate WebDAV folder on your dotCMS server.

Setting up WebDAV on Linux

Make sure the following properties in the file are configured as shown below:

4. Mount a share in the dav directory on your dotCMS server.

For example, to set up a WebDAV connection to dotcms.org at the mount point /dav on your local host, use the following command:

You will then be prompted for your dotCMS username and password which will give you access to the WebDAV folders on your dotCMS server.