Organizations are always looking for ways to make their technology infrastructure more flexible and scalable, and dotCMS is no different. That is why we have invested significant developer time and resources into scaling dotCMS with containers like Docker and Kubernetes, giving customers the opportunity to build with a platform that delivers at higher speeds while consuming fewer resources.

In our upcoming dotCMS 5 Series, dotCMS will start releasing Docker images, like our current .zip and .tar.gz release files, as part of each subsequent dotCMS release. Internally, we have been running and testing dotCMS in Docker for several months now and are in the process of moving a few of our own dotCMS properties to Docker-ized installations.

At the same time, we understand that creating Docker containers is only part of the story. We can’t forget about the orchestration of those containers for manageable and scalable dotCMS environments. This post is intended to prove how our reference dotCMS Docker configuration can be ported into an orchestration environment other than Docker Swarm. It will test our assumptions about how easy it would be for clients to take our reference implementation and port it to the container orchestrator they are using in their infrastructure.

While there are many orchestration choices availability, we chose Kubernetes for this post because of its popularity and applicability to multiple cloud providers as well as on-premise hosting.

How dotCMS Works With Kubernetes

Our current plans are to release a ‘Docker-Compose.yml’ file along with our Docker images as a reference implementation that shows how each container needs to be configured and how the containers depend on each other. We believe that the Docker-Compose file succinctly captures all of the relevant information needed for configuring the containers to work in any orchestration environment. Of course, the Docker-Compose file can be used to run directly in Docker Swarm and Docker Compose. It has been our assumption from the beginning that it would be a trivial matter for somebody to take this reference implementation and create a deployment for the orchestrator that they use in their organization, but is this true for Kubernetes?

Before working through an example, here are the six different containers dotCMS will be providing with each release:

While we did port the entire reference implementation to Kubernetes, for the purpose of our discussion and examples here, we will just focus on the configuration of the dotCMS container.  Here is an excerpt of the Docker-Compose file with all of the other service definitions removed except for dotCMS: 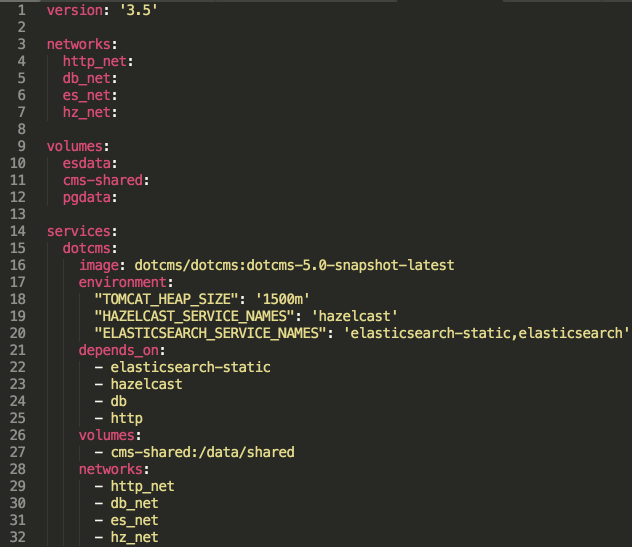 For those of you familiar with Kubernetes, you know that the way Kubernetes handles volumes is a little more involved than what you see in this Docker-Compose file. So, those of you with Kubernetes experience recognize how we have to declare and provision our persistent volumes. In a production scenario, it is likely that “/data” would be a NFS mount. Then we also need to declare a PersistentVolumeClaim as seen below: 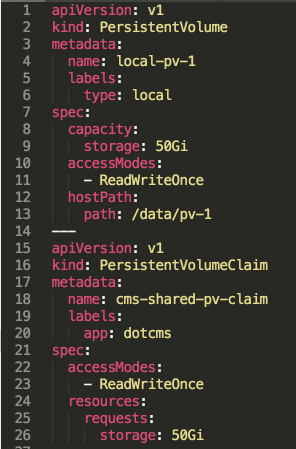 Of course, that PersistentVolumeClaim has to be declared as a volume in our Deployment and then mounted into our container.  These difference around volumes are really the only substantive differences in the definition of our Kubernetes deployment: 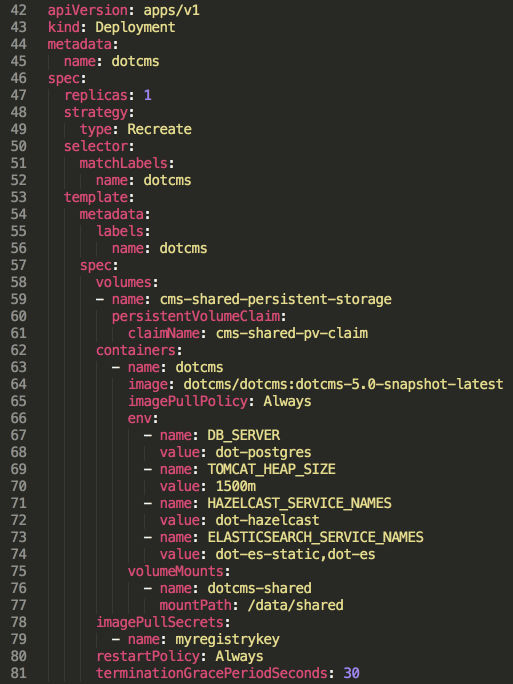 You may have noticed that in the Kubernetes deployment file that our other services names have changed. This is because Kubernetes automatically adds environment variables to nodes when it starts them up. These variables are based on the service names. So for example, in the Hazelcast node, Kubernetes automatically sets an environment variable named “HAZELCAST_PORT”. This is fine, except that variable name is one that we use internally for dynamic configuration. To avoid this collision, we added a “dot-” prefix to the service name. We also had to abbreviate the ElasticSearch service names because of a fifteen character limitation.

Those of you experienced with Kubernetes also know that this deployment is not exposed or available to be called by other deployments or from outside of the Kubernetes cluster. To make it available, we need to define a service, like this: 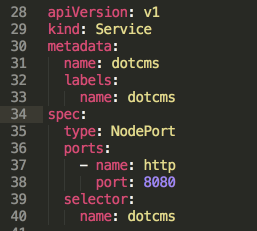 There you have it! We’ve taken our reference implementation from a Docker-Compose file and ported it over to Kubernetes. While Kubernetes does not native dependency management, one of the reasons for our customized third-party containers is that we have added some custom discovery logic that ensures their dependencies are in place prior to the main process in the container starting up.

Experienced with Kubernetes? Running dotCMS Will Be A Piece Of Cake

If I, as a Kubernetes newbie, can make it work, I am confident that more experienced Kubernete engineers will have no problem at all taking our reference implementation and porting it to Kubernetes and their specific environment.

It is also worth mentioning that I used the Kompose to translate our Docker-Compose file. While Kompose did generate some noise, it also generate Kubernetes deployment files that were very similar to the working files I manually created.

Disclaimer: Some details discussed above are subject to change before the first release of our Docker images and implementation.

Containerization with dotCMS: Everything You Need to Know

Headless CMS vs Hybrid CMS: How dotCMS Goes Beyond Headless

What’s the difference between a headless CMS and a hybrid CMS, and which one is best suited for an enterprise?

When it comes to the content foundation of a digital experience platform, critical capabilities are reasonably straightforward. There are only four, really - since security, scalability and containeri...